For the past week or so, I’ve been following a series of very fascinating, if not downright entertaining, videos sent to us from a reader in Bisbee. The lady who sent us these videos, Alison McLeod, is chronicling a very intriguing saga that’s got the entire town in an uproar, pitting neighbor against neighbor. As with anything in Bisbee, it involves something quite quirky – and colorful. Yellow to be exact. And it’s got residents sporting yellow at city council meetings – even the Police Chief. One person dressed up as a banana and another performed a magic act with a yellow handkerchief, all in an effort to make their point. To throw in a little satire for good measure, one video depicts a yellow banana hooked up to a wire and smoking as if it’s about to erupt in flames. I promise I’m not making this up. 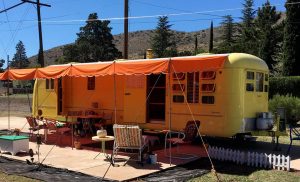 What it all centers around is a yellow vintage 1953 Vagabond Mobile Home which is currently parked at the Blue Moon Bungalows at 205 Douglas Street in Bisbee. The owner, Kristine Gale, signed a one-year lease in August of 2016 to live there in her vintage trailer. Not even a week passed before she found a 15-day vacate notice on her door. The neighbors across the street felt her trailer and a couple of others on the property did not belong there and could potentially pose a fire or safety hazard, so they complained to the city. That prompted a notice that she was in violation of a city zoning code which prohibits the occupancy of vehicles and trailers and forbids the use of a recreational vehicle for permanent occupancy within city limits.

As you can imagine, it turned into a huge controversy, dividing the town into a pro-trailer/anti-trailer rivalry. Many Bisbee residents support Gale and the Blue Moon Bungalows and believe she should be allowed to stay; they feel her vintage trailer exemplifies the iconic history that draws tourists, photographers and history buffs to Bisbee. On the other hand, the residents across the street, Carole and Dan Beauchamp (a former Mayor of Bisbee), have lived in their home for 20 years and they also have supporters who believe they’re in the right.

Richard Obenchain, one of Blue Moon’s property owners, filed an appeal. The city’s Board of Adjustment held a special meeting on February 2nd, which was packed to capacity (watch the video here). After hearing from both sides, they voted unanimously in favor of the appeal, which would allow the mobile home to stay. 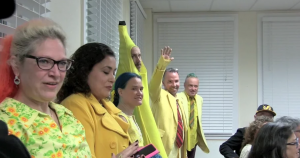 The council heard arguments from both sides at their March 21st meeting, which of course was captured on yet another interesting video (watch the video here). But the issue remains; the city council went into executive session and subsequently tabled the item to the next meeting. So what happens next? We’ll just have to tune in to find out. There’s a Town Hall meeting scheduled this Saturday.