As the grand opening of the new Mar-a-Wallgo resort approaches, experts from both countries, as well as the Trump Organization, are scrambling to estimate its economic impact. President Trump has agreed to allocate all net proceeds from the resort toward building and maintaining the border wall, starting with a 25 mile stretch in both directions on either side of the resort for a total of 50 miles of wall. To complete the wall, the Trump Organization plans to build cross-border resorts every 50-100 miles along the entire wall to pay for the various segments, much like the Arizona Adopt-A-Highway program sponsors segments of highway to help keep it clean. 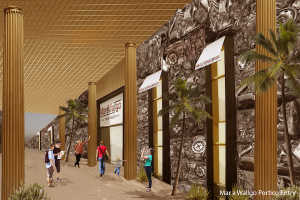 Trump maintains that completing the border wall will cost an estimated $10-$15 billion, but experts believe the wall could actually cost up to $25 billion. Trump has claimed that Mexico will pay for the wall, but Mexican President Enrique Pena Nieto has repeatedly stated that will happen when hell freezes over. Luckily, Trump’s newest hotel concept appears to be a compromise that will draw money from both the U.S. and Mexican economy. Secretary of State Rex Tillerson notes that this is proof that Trump has a real knack for diplomacy.

“It’s not a donation,” Trump stated, “It’s simply creating the foundation for one of the most popular, innovative, and interesting new travel destinations that has yet to be created. We couldn’t have Mar-A-Wallgo without the wall beneath it, so let’s make sure that it’s the best damn wall money can buy. Even if it is my money.”

While the hotel may only take up a small section of the 1,900-mile promise, there’s a lot more money-making potential built into the plan than just keeping two countries apart. Visitors who take a leisurely stroll alongside the border barricade will see 50 miles of highly exploitable advertising real estate. Billboards, big screens, and tasteful neon signs will guide you towards the nearest Trump hotel and the amazing amenities they offer during your visit to the great divide.

When questioned about letting Mexico off the hook, Trump stated, “As I’ve said in my speech, there are many ways for Mexico to reimburse us for this wall. While my newest hotel chain may be footing some of the bill, there will be plenty of employment opportunities available for the Mexican people. $15 million dollars worth of maids, handymen, pool boys, and bartenders is quite alright with me. I’ll make sure they work off every penny left on the tab.”

With 1,250 miles of wall left to go, Trump already has six additional border hotels in development. It would take 26 hotels to cover the entire length of the proposed wall, not including replacing areas that already have the original border fencing.